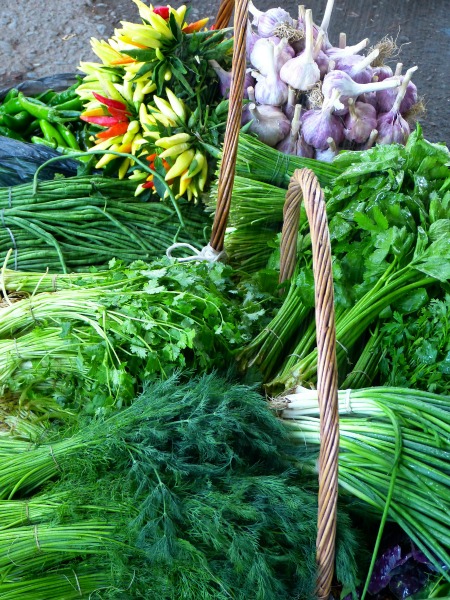 Avid gardeners everywhere know what a production it is to plant their vegetable garden each Spring. Tilling the ground, making sure the rows are straight, planting the seeds, and marking their locations. Growing Perennial Vegetables has become a pet project of mine. They will produce a crop every year without having to be re-planted.

Foraging for food in the wild is similar to what I am gradually trying to do here. It is said that out in the fields and woods, millions of tons of perfectly good wild food goes to waste each year. In our soft society, people don’t know how to identify, gather, and prepare these foods as our ancestors did.

Growing Perennial Vegetables to supplement the usual tomatoes, peppers, onions, etc. is a great way to add to your diet, while cutting back on the work. Some tasty additions to my Zone 5 garden are: 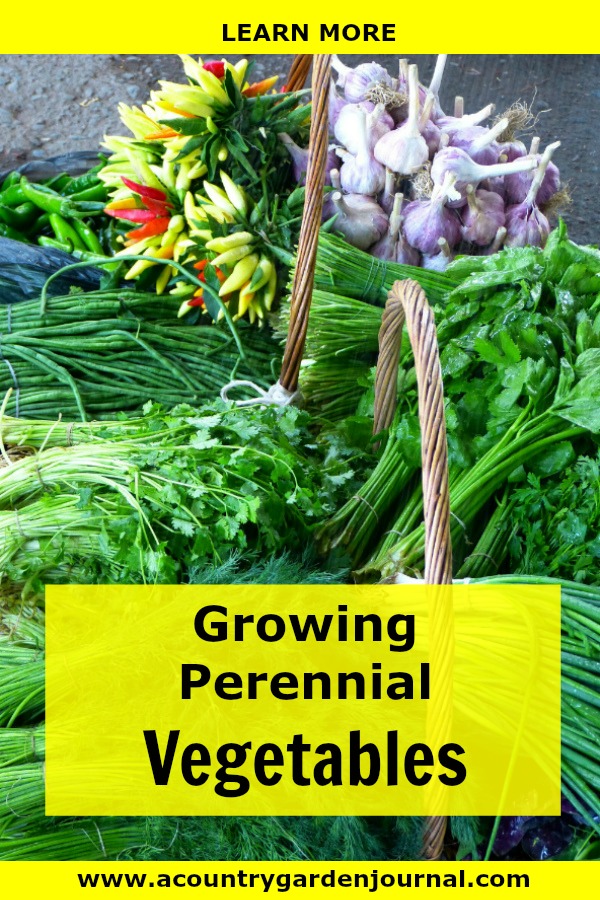 Many times, I’ve driven out in the country and watched along the roadside for the tell-tale ferny growth of wild Asparagus. I’ve long since given up wading in and out of deep ditches to pick it. Now, I just plant my own so I can gather it a few steps from my back door.

Boiled, added to soups, breaded and fried, folded into an omelet, or baked. I’ve never had an asparagus dish that I didn’t like.

Click on any image to find out more about the item!   #ad

Years ago, I wanted to create a flower bed right where the previous owner had what was left of an asparagus patch. I painstakingly dug up the roots (since I didn’t know what variety it was) and pitched them under a nearby hedge. A few years later, I noticed a fine stand of young asparagus growing right where I had disposed of the roots. This perennial vegetable knows the true meaning of the word tenacity! 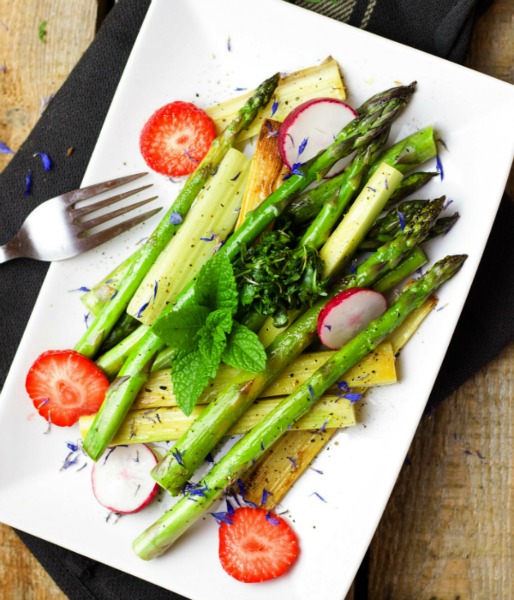 Apparently, it’s not that hard to start asparagus, and I think of this whenever I order a new batch of roots from a garden nursery. I get a chuckle out of the labor-intensive directions.

Asparagus and tomato plants get along well together. There’s something about these two plants that seems to “help each other.” I have seen some folks dig holes right in their asparagus patch to plant their tomatoes.

The tall ferny asparagus foliage gets kind of tattered looking as the season progresses, but you must not cut it. This feeds the roots so they can produce another crop next year. I intend to plant some seeds of tall Cosmos among the asparagus so the foliage will be augmented with colorful flowers. 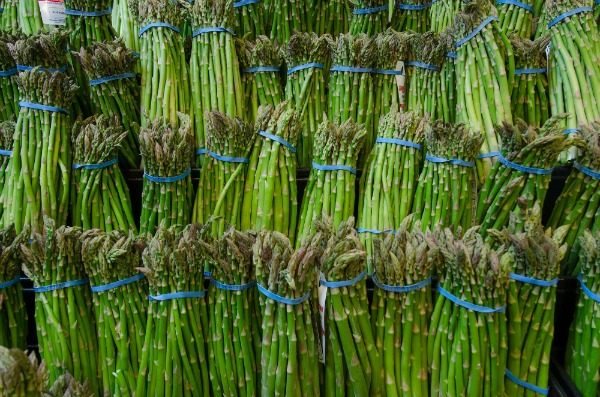 Cinnamon Vine (Dioscorea polystachya) is a yam, but has a taste that is similar to potatoes. This perennial vegetable produces heart shaped leaves that resembles the Morning Glory. The tiny white flowers smell like cinnamon.

The small potato-shaped bulbils growing on the vine can be planted or eaten. As the bulbils drop to the ground each year, they sometimes “plant themselves” and you’ll end up with quite a thicket.

Digging the underground tubers takes some time since they can grow 3 feet long. Always cook them. Don’t eat them raw. Bake, fry, roast, broil, boil, anything that you would do with a regular potato.

Cinnamon Vine is a well-known food crop in Asia. 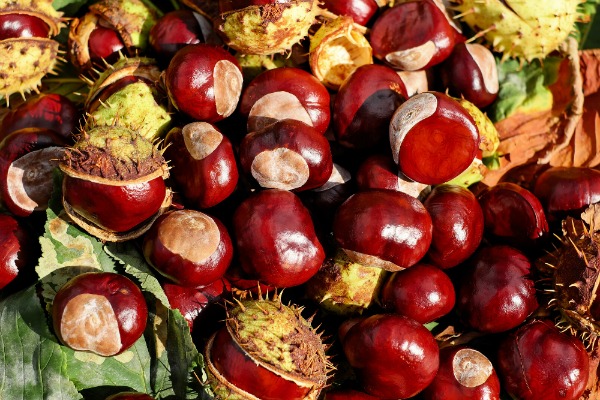 Yes, I know, this is a tree. (Humor me for a minute!) People who move to the U.S. for Eastern European countries often buy chestnuts by the 10 pound bag. They are a staple of their diet.

They cook and eat them like potatoes, and some people use them in place of pasta.

Just imagine – – – a crop that takes the place of potatoes that you don’t have to plant every year. Any crop that I don’t have to dig has my undivided attention. Cutting down on labor is an important consideration in growing perennial vegetables.

And not having to worry about winter storage is an added bonus. Regular potatoes rot, get mushy, or get eaten by mice. But chestnuts can be put into a container and stored right in their shells.

You will need to plant two different varieties of chestnuts so they can cross pollinate.

Skirret (Sium sisarum) is a famous perennial vegetable from Tudor-age England. It is currently making a resurgence in popularity there. Henry the Eighth is said to have frequently dined on it.

It has a sweet carrot flavor with a peppery aftertaste. It can be eaten raw in salads. They can be boiled, baked, breaded and fried, used in soups, and even made into a pot pie. The leaves are also edible.

Skirret likes to grow in shade, but is not too fussy about it. They grow underground in long, fat tubers that resemble dahlia roots. They should be harvested after frost kills the foliage. The white flowers resemble Queen Anne’s Lace. 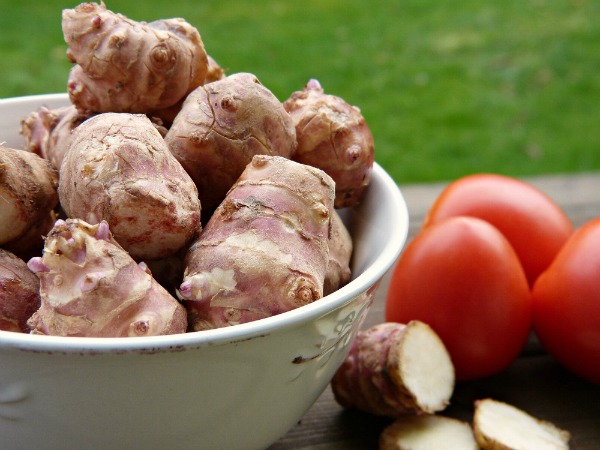 Jerusalem Artichoke (Helianthus tuberosus) is very different from globe artichokes. This plant often grows wild along the roadside out in the country. People have mistaken it for some type of wild sunflower, not realizing that several pounds of edibles are growing right beneath their feet.

They can be cooked like potatoes, and some folks can’t get enough of them. It might, however, give you a stomach ache if you over-indulge.

It’s rather hard to peel them, since they are knobby, but just keep going and you’ll eventually get to the good part. 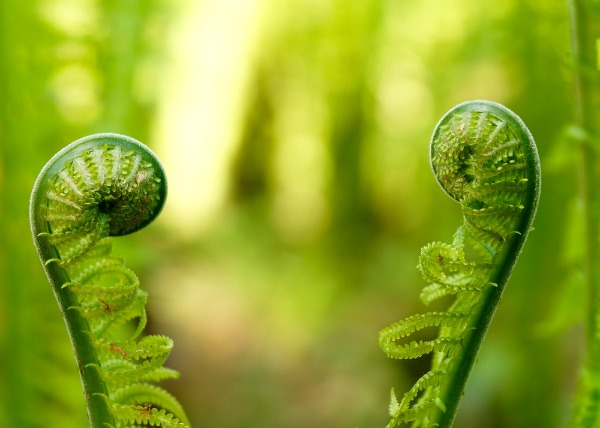 I intend to start a patch of Fiddlehead Ferns along the north side of my house where little else grows (except weeds). It would be great to have plenty of these plants so I can afford the luxury of using some tiny, newborn fiddleheads in the kitchen.

Make sure you purchase Ostrich Fern (Matteuccia struthiopteris) plants. Many other types of ferns are just not something you’d want to put in your mouth!

They can be cooked like asparagus, and are considered by many to be a delicacy! I have never seen fiddleheads in the grocery store. I imagine anyone lucky enough to find any devours the evidence!

The idea of interspersing these plants with Morel Mushroom spore is on the back burner. 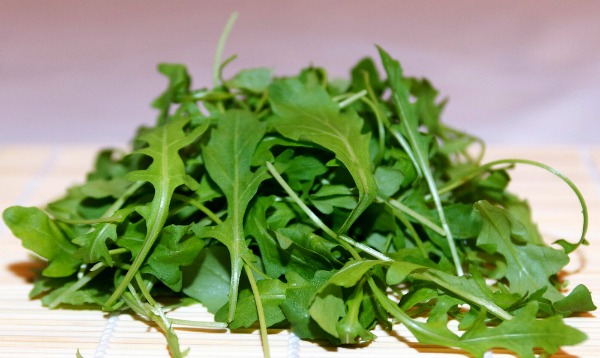 Arugula is a leafy green perennial vegetable that is familiar to most of us these days. Whether wild or one of the cultivated varieties, it will readily self-sow. In other words, you should only have to plant it once.

Be certain of the location where you plant it, for it will spread and take over. And be sure to let a few plants go to seed for this purpose.

Arugula can be added to salads, salad dressings, and used on sandwiches. Add it to soups and other dishes, in fact, anywhere that you can use a “peppery bite.” Growing perennial vegetables can add greatly to your vitamin intake.

The American Groundnut (Apios Americana) produces beautiful, fragrant flowers. They are pink, purple, or a reddish brown. Some people confuse this plant with the Cinnamon Vine, but their flowers are very different.

The tubers grow like a string of pearls underground. They don’t grow very deep, so they are easy to dig. The entire plant is edible, including the flowers.

American Groundnut must be cooked: Bake, boil, pan fry, etc. They have a wonderful, nutty, potato-like flavor. You might find the flavor to be a bit like a turnip.

It was an important food source for Native Americans and the early colonists. It has been cultivated in Japan for food for over 100 years. 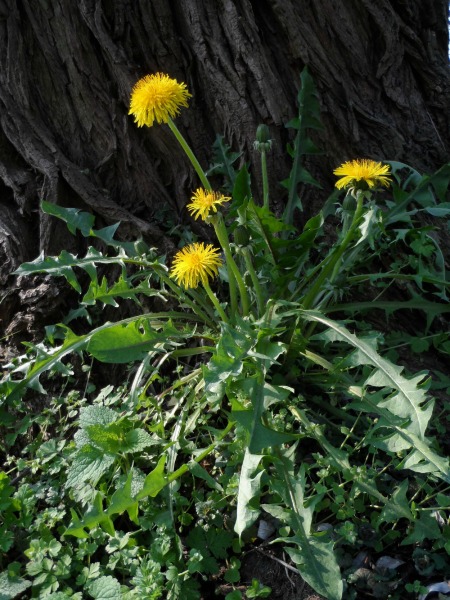 My aunt used to pick tender dandelion leaves in the Spring, and “shake the dickens” out of them before putting them into her basket. They can be just filled with dirt.

She made these into Dandelion Patties, which my uncle ate like they were going out of style. The washed dandelion greens were mixed with a little beaten egg, salt, pepper, and went straight into the frying pan. Adding a little chili powder, garlic powder, and onion powder was my contribution to the family recipe.

All parts of the plant are useable. You can brew a coffee substitute from the roots. Wine from the yellow blossoms. Add the leaves to soup, potato salad, etc.

This perennial vegetable has many uses. Just don’t pick dandelions where the ground has been sprayed. 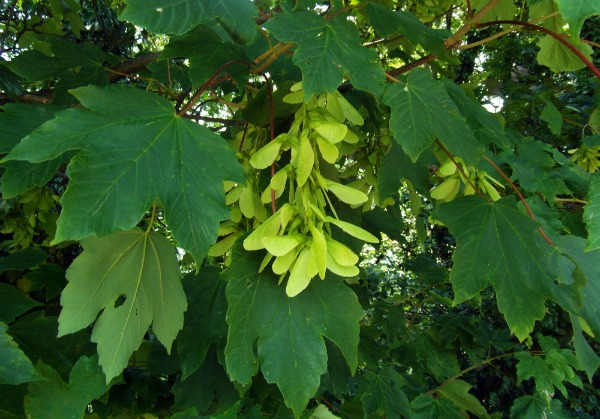 When Maple seed pods are newly formed and very soft, gather them, and boil them in water for a few minutes till tender. The taste is similar to garden peas. Drain them, then just add salt, pepper, and butter and you’ve got a great side dish.

Some folks go to the effort of peeling the tiny “beans” out of the seed pods before cooking, but I think that’s far too much effort.

I like Maple seed pods raw. If you are a “salad addict” like yours truly, just hold them up by their little winged “tails” and dunk them into Ranch Dressing. I could make an entire meal out of them.

Make sure you gather them early in the season. If they get too big, they will be tough, bitter, and not worth the effort. 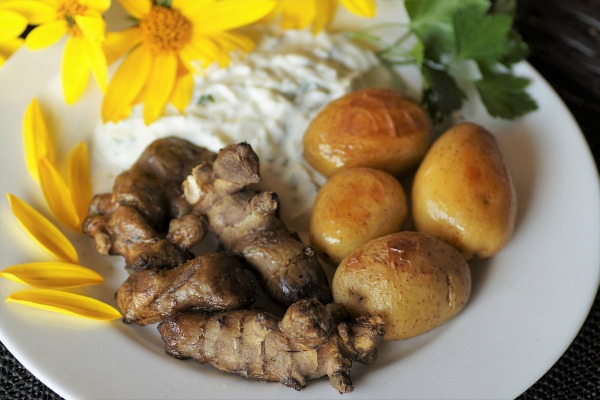 START OUT WITH SMALL PORTIONS

Be cautious when introducing a new food into your diet. Always try it out sparingly. Don’t dive in and eat an entire panful, then find out your stomach can’t take it.

As with any kind of vegetable, fruit, nut, mushroom, or whatever, you will always find someone out there that will be allergic to it. The same goes for possibly causing an adverse reaction with their medication.

I am told that some people don’t even dare eat tomatoes or grapefruit, etc., especially when they are taking certain types of medication. Always let caution be your guide. AND speak to your doctor!