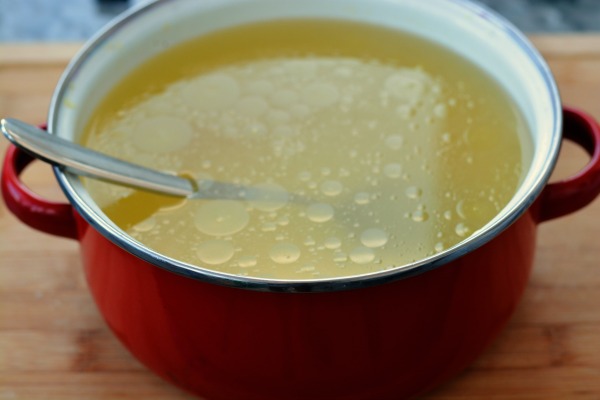 My Mom made the most amazing Homemade Chicken Broth. It was simply scrumptious, and it disappeared fast!

She was an old-fashioned cook who used recipes and cooking methods that her Grandma used back in the 1800’s. The result was the ultimate in “comforting” Comfort Foods.

She always disagreed with the professional chefs that “doctored” their broth with onions, celery, carrots, garlic, bay leaves, even dill. I’ve also seen recipes that called for parsnips and tomato paste, and claimed they still ended up with something that tasted like chicken.

Mom said that a recipe that calls for a whole onion might surprise you, and not in a good way. An onion that is advertised as being “mild” might actually have a strong, “hot” flavor that will completely overwhelm the delicate taste of the broth. Once you add it, you can’t take it away.

When you mask the marvelous, pure flavor of the chicken with all sorts of additives, you might just as well buy the canned variety from the supermarket. You probably won’t be able to tell much difference.

Click on the image to find out more about the item!   #ad

Mom always made her broth with just three ingredients:

Then depending on the recipe that you are making afterward (soup, gravy, casserole, risotto, etc.), you can add any flavorings to taste. And let’s face it, everyone’s “taster” is different.

WHAT PARTS OF THE CHICKEN SHOULD I USE?

Start with a whole chicken. Cut the chicken into individual pieces. This isn’t anatomy class. Don’t worry if the final product isn’t a thing of beauty. You’re only making broth.

Use the legs, thighs, wings, back, neck, AND the white meat. Be sure to include the bones, as well as the skin since the “flavor is in the fat.” Some chickens contain more fat, which means you will end up with more broth. 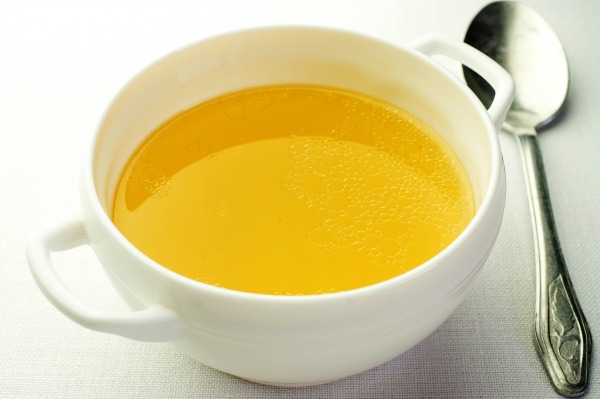 WHAT NOT TO USE IN BROTH

Remove and discard the liver, heart, gizzard, etc. Carefully inspect the rib meat. Anything dark is what’s left of the lungs. You do not want this in your broth. Scrape it off with a paring knife.

If you use a home butchered chicken, remove any eggs that might be within the bird. You do not want this in your broth.

Measurements are difficult. It’s hard to find a chicken that is precisely 3 pounds, 6 pounds, or whatever, especially when you get rid of the sack of “innards” that is always stuffed inside it. Plus, a chicken might still be partially frozen, which adds to the overall weight.

Place the chicken pieces into a large kettle or stock pot. Sprinkle in one teaspoon of salt for each 3 pounds of chicken. You can add more salt when cooking is finished, if necessary.

Cover the chicken with cold water. I don’t measure, since I will be adding water a little at a time. Do this periodically throughout the cooking process.

Never follow a recipe that tells you to add 1 or 2 cups of water later in the cooking process, since that might be far too much. Watered down broth is of no use to anyone. (Ask me how I know this!) 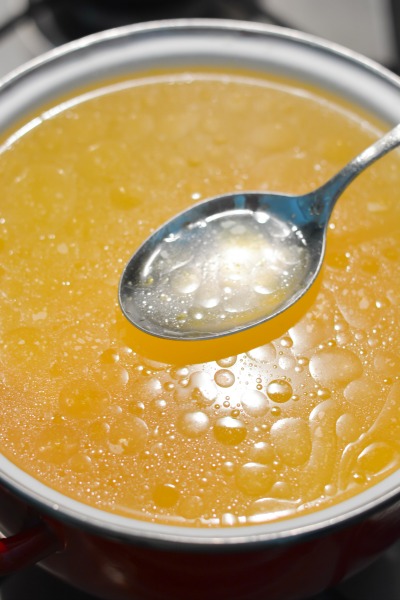 GIVE IT YOUR UNDIVIDED ATTENTION

Do not get involved in watching a soap opera or video game while making chicken broth. Watch it like a hawk (no pun intended).

Do not put a lid on the pot. The lid would cause the broth to heat up faster, which you don’t want to see happen. You need to be able to watch carefully while the chicken simmers.

You must frequently stir the liquid and the chicken pieces around so nothing sticks to the bottom of the pot. It must not be allowed to boil, scorch, or burn. Regret is a terrible thing.

Never boil broth! Bring the water up to a bubble, then turn it down. Just a gentle simmer is best to ensure a clear broth. Nothing is worse than chicken broth that looks like it’s filled with sediment.

Skim off the grayish, bubbly foam that floats to the top as you simmer the chicken. Fat is a different color – – – more yellowish. Fat is good. The foam is definitely not, for it will cause a cloudy looking broth that looks very unappetizing.

A lower temperature calls for a longer cooking time which averages 2 to 3 hours. This also depends on the size of the bird.

Yes, I know this takes time. But keep in mind the savory, heartwarming soups you will create with the broth. 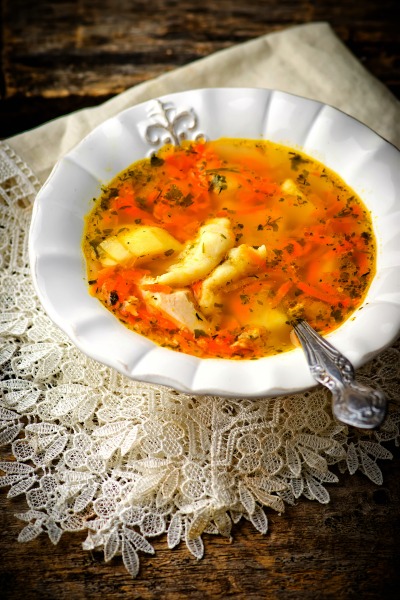 HOW MUCH BROTH WILL THIS MAKE?

The longer you cook it, the amount of liquid will decrease. This is not altogether bad, since the flavor will be much more concentrated. In other words, you will extract more flavor from the chicken. This means that adding bouillon cubes to a recipe will be unnecessary.

Plan on getting at least a quart (4 cups – – – possibly more depending on the amount of fat on the chicken) of wonderful broth out of each batch when using a 3 pound chicken.

Broth made just with chicken meat makes about half the amount of broth as does a recipe that calls for vegetables and herbs. Those recipes are essentially a blend of vegetable broth and chicken broth. And the flavor of that would not be as pure as real chicken broth.

I do not roast the chicken before making broth. If I used a recipe that contained carrots, celery, onion, etc., that might be workable, but when it is just chicken, it is unnecessary.

When the broth is a rich, golden color, the flavor in the bones, meat, and fat has been almost entirely transferred to the liquid. Taste the broth to make sure it suits you. Cook longer if you want it to be stronger.

As soon as it is finished cooking, remove the meat and bones from the broth. I never wait for it to cool, for the meat begins to absorb the liquid back into it immediately. You don’t want that.

Strain the broth through a very fine strainer into a separate kettle. Put bones, meat, and skin into a large strainer over a separate pan. Press everything down with a slotted spoon. This helps it drain faster.

When it finishes draining out the broth, you can dispose of bones, meat, and skin, keeping back only the pieces of meat that still look soft and moist. Make sure to remove any gristle and tiny bits of bone. The meat can be cut up into bite sized pieces and saved to use in soup.

CAN YOU FREEZE CHICKEN BROTH AND CHICKEN FAT?

Your broth can be cooled and then frozen in 2 cup containers for later use, or else used immediately.

Freezing broth in ice cube trays and stored in plastic bags in the freezer is a great idea. You can add a cube or two to a dish you are preparing if it needs “a little something.” This is far more delicious than commercial bouillon cubes.

If you plan on making soup immediately, drop in the noodles or dumplings to cook them. Lastly, you can add the meat back into the soup to reheat it.

Any fat that is in the chicken broth will be largely soaked up into the noodles or dumplings if you are making soup. This ensures that your soup will not have a greasy taste.

NOTE: If you want to store the broth for later use, do NOT leave the meat in the broth. It will immediately soak all the liquid back up into it, and there is no remedy for this unhappy occurrence. 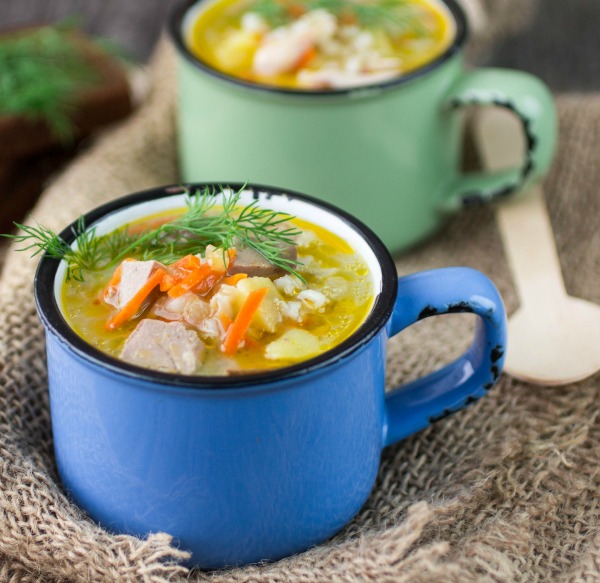 Antique cookbooks mention that clear chicken broth is an ideal food for “bedfast invalids” to help them regain their strength. I have read that “fat gives you energy,” so perhaps this explains the popularity of Chicken Broth. They don’t call it Jewish Penicillin for nothing.

Savory Chicken and Noodles (or very often, Beef and Noodles) ladled into a bowl over creamy mashed potatoes is an absolute treat. I am told this is “An Iowa Thing,” and that people in many parts of the country have never heard of it.

And sitting on the back step at sundown with a cup of homemade Chicken Soup and a spoon is a relaxing way to end your day.