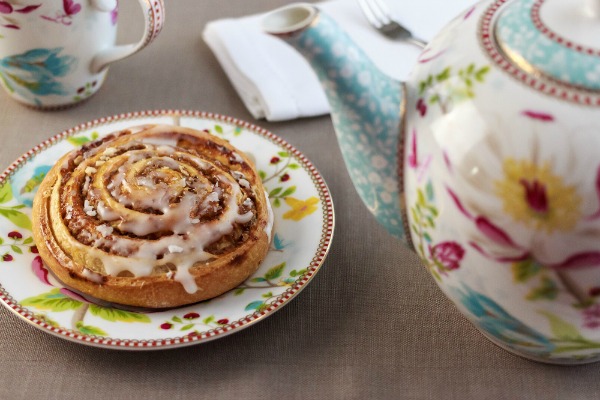 All-American Cinnamon Rolls is a recipe that I grew up with. For breakfast, snack, even midnight snacks. And these days, a Coffee Break can run the gamut of chips, cookies, pretzels, string cheese, and even Greek yogurt. But the number one crowd pleaser has always been the CINNAMON ROLL. Some large as a dinner plate – – – others dainty enough to be just a few bites.

My Mom used to bury hers under mounds of fluffy white frosting, and she got no complaints from us. I have seen a certain family member devour half a panful at just one sitting, but I swore I wouldn’t tell on him.

This Cinnamon Roll recipe has been in my family for about 90 years. The dough can also be made into Dinner Rolls or baked into Bread.

2 cups boiling water (OR use potato water, and just reduce the amount of salt in the recipe)

2 beaten eggs (This is optional. It just makes the dough a little richer.) 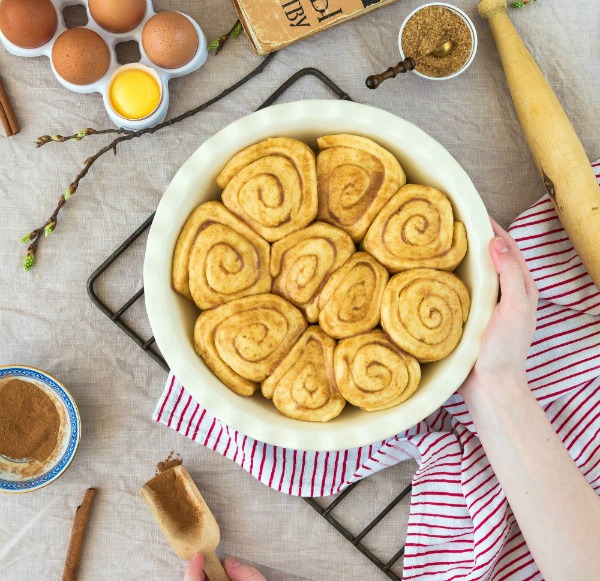 Mix and cool the first 4 ingredients. Combine the next 3 ingredients and let stand for the yeast to bubble and rise. Combine the two mixtures and blend well. Add eggs and flour and finish mixing. Let rise till double. Place in greased pans at desired size: (for Cinnamon Rolls, Dinner Rolls, or Bread.) Bake at 350 degrees for 25 minutes or until golden brown. (You may let the dough rise, and put it in the refrigerator till needed.)

Roll the dough into a rectangle of approximately 15 inches by 10 inches. Handle the dough gently as it is very soft. Butter it liberally and sprinkle generously with white sugar. Dust with cinnamon over the top of the sugar. Sprinkle with chopped pecans and/or raisins if you like. Starting with the widest edge, roll the dough tightly like a jelly roll. Slice about 3/4 inch thick and place side by side in a well-greased 9 inch by 13 inch pan. These Cinnamon Rolls are slightly crispy on the outside, and soft and pillowy on the inside.

Some folks like Cinnamon Rolls topped with vanilla frosting. Others like them drenched in a caramel sauce. Some people like both. I always err on the side of excess, so I would use the caramel sauce in the bottom of the pan and also poured over the top of the rolls prior to baking. Top each of them with a big blob of vanilla frosting after they’re baked and cooled. If you’re going to Guild the Lily, then Guild the Lily!

Mix well and drizzle over warm rolls so it will soak down into them. Add another coating after they’re cool. (Double the recipe if needed.)

Combine and boil 1 minute till sugar is dissolved.