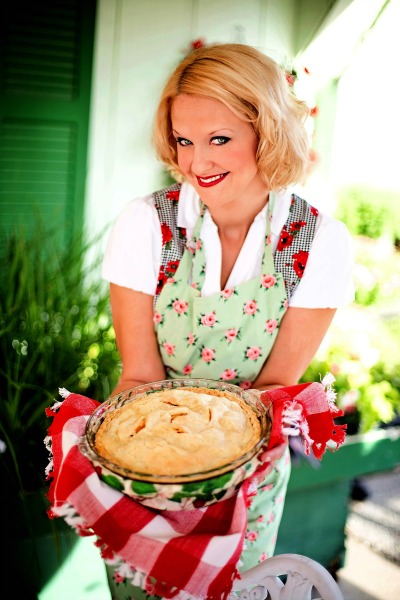 The apple is the one fruit that everyone seems to like. The All-American Apple Pie is relished in every household, even though many ladies these days cave in and buy them at the bakery.

I grew up rolling out pie crust and making desserts from scratch. Naively, I thought everyone else did the same, until I heard a woman brag that she’d made 10 pies the night before for a function. I thought she was superwoman, until someone whispered to me, “She BUYS her pie crust!” At the time, I didn’t even know you could.

Life would be simpler (not to mention quicker) if I’d just give in and buy things at the store, but I stubbornly keep doing things the hard way. It just tastes better!

There are many recipes for Apple Pie, but we’ll get to that in a minute. For now, let’s talk about the best apples to be used for baking them. Some apples will give very disappointing results when baked. They will either be mealy, chewy, or turn to mush. Always use a firm apple for pies.

If you plan to plant a tree so you can indulge in apple desserts to your heart’s content, you need to evaluate the ones that are best for this use. Try different varieties of apples at the supermarket before ordering a tree to help avoid disappointment. It is sometimes hard to evaluate them this way since they were probably picked green and ripened during shipment. The modern varieties have larger, more picture perfect fruit, but sometimes sacrifice flavor.

I lean toward heirloom varieties since they are usually more hardy and taste better. The time I spend on planting and caring for a tree and preserving the harvest is more than justified. I defer to my ancestors and will happily forego produce selected from a grocery store bin that has been picked over, dropped, squeezed, and sniffed.

NOTE:  It is possible to purchase a gift box containing a selection of heirloom apples on the internet. It is always best to taste the fruit variety before you commit to planting a tree. 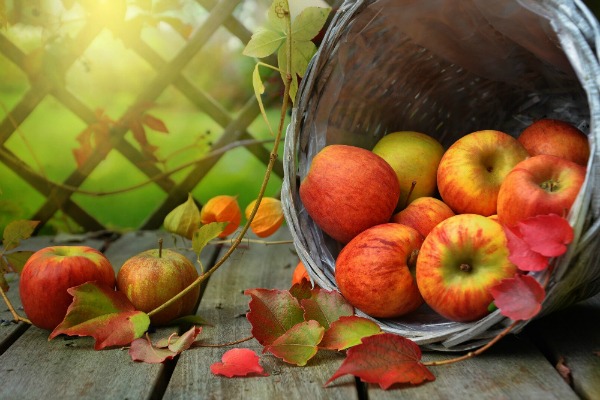 The “Northwestern Greening” Apple is the variety my Dad raved about. “Makes the best pie in the world,” he said positively, and he was a man who really knew pie. It is said to be one of the best cooking apples, and is an excellent Winter keeper for up to 7 months if refrigerated. The jury is still out on whether or not it is the same as the “Rhode Island Greening” Apple. (I doubt it!)

“Wolf River” Apple is one that my maternal Grandma grew, and she always said the fruit is so big, “It takes a child two hands to hold one.” They are great for baking, sauce, drying, and apple butter. They are not the best for fresh eating unless you find one with more reddish color and pick them early in the season. The “Wolf River” Apple only reliably produces a fruit crop every other year.

The “Esopus Spitzenburg” Apple was Thomas Jefferson’s favorite. Apparently his opinion is shared by many since I heard a famous TV chef say it is the best apple he ever ate. It is also good for cooking and juice. This is a very “fussy” apple to try to grow.

The old familiar “McIntosh” Apple is hardy clear to the Canadian border. It ripens in late August into September, and is great for sauce, cider, pie, and apple crisp.

I have an antique apple tree in my yard called “Grimes Golden.” It is sweet and spicy and just bursting with juice, and it produces more fruit than I can use without having a neighbor planted near it for pollination. It is excellent for cooking as well as fresh eating.

OTHER APPLES THAT ARE GREAT FOR PIE 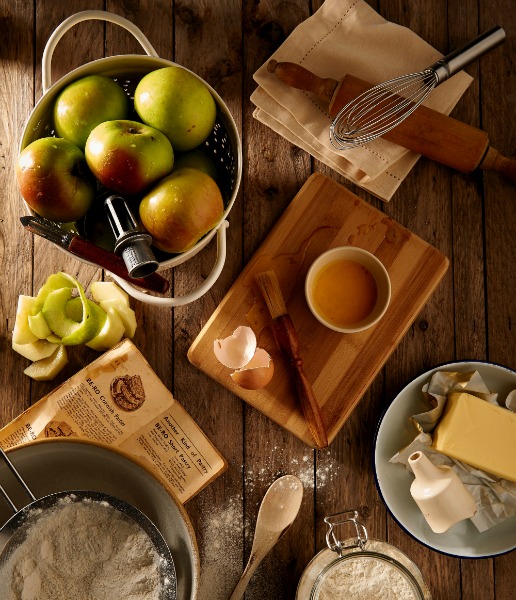 For the filling measurements, a good rule of thumb is the following:

2 to 3 cups peeled and cut up apples

As you cut up the apples, mix them with the sugar and lemon juice. It helps prevent discoloration. When the spices are added, it turns the mixture brown anyway, so I don’t stress over this.

Making apple pie is not an exact science. Following a pie recipe in a cookbook can lead to some very unsatisfactory results, since they never tell us the type of apple they used. Each person has a different preference for sweet and tart, and you simply have to experiment depending on the apple variety you are using. “Granny Smith” Apples, for instance, are very tart, so they require more sugar. If you must be careful about your sugar intake, try combining a sweet apple and a tart apple. You won’t need to add as much sugar.

Mix the apples with enough sugar till it suits your particular taste. Then add the spices. Cinnamon or nutmeg are normally used, but I have known women who swore by pumpkin pie spice, or even ginger and a bit of brown sugar. Then taste. You might prefer more spices. I always thicken my apple pies with minute tapioca because it doesn’t detract from the taste of the fruit, and also prevents the pie from being “runny.” My pies come out of the pan in perfect slices. Use the butter to dot the top of the filling before you put the top pie crust on.

I do not slice apples for the pie filling. I cut them up into smaller pieces. This seems to prevent ending up with a big, “hollow” space underneath the pie crust. How much fruit does it take? It depends on how tall you want your pie. I have seen some apple pies that looked ten-stories-tall. But, as the apples cook down, this seems to be the cause of that “hollow” space underneath the pie crust.

This recipe has been used in our family for decades. Some pie crust recipes are so fragile they crumble. Others respond poorly to the heat generated from your hands. This is an easy-to-handle pie crust recipe.

Mix flour, sugar, salt, and baking powder. Cut in the shortening until crumbly. Beat together the water, lemon juice, and the egg. Add the wet ingredients, and mix well. Form into two rolls. Wrap in waxed paper, and keep it in the refrigerator. It is easier to work with it when it’s chilled. It makes two double crusts, depending on how large your pie pan is. It is an easy dough to handle if you want to make a lattice crust. Good cooks agree that a good pie crust dough will “grease its own tin.” 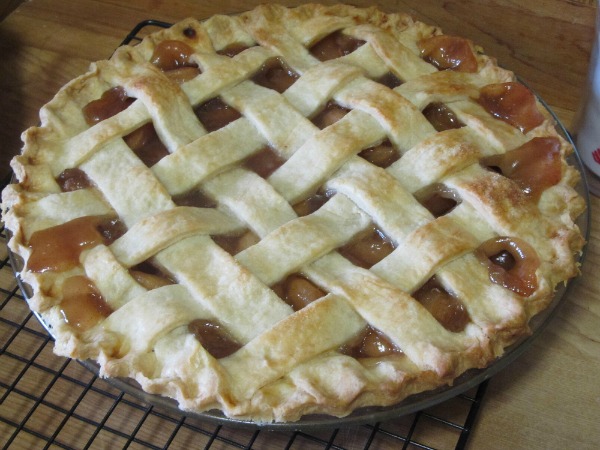 HOW TO ROLL OUT A PIE CRUST

Since there is an easy way and a hard way to do most things, let me share the simplest method for handling a pie crust. Cut two 20 inch sheets of waxed paper. Put one-fourth of the pie crust dough in the middle of one sheet, shaping it into a ball with your hands. Put the top layer of waxed paper over it, and start rolling.

Learning to make a circle out of it really does take some practice, but don’t give up. You can always tear and patch when necessary. When the waxed paper gets wrinkly, remove it, straighten it out, and replace it.

I flip the circle of dough over a few times as I roll. You are aiming for about 1/8 inch thickness. When you think it looks perfect, lift it and hold it up to the light by the edges of the waxed paper. If you see any grey areas, you know the dough is still too thick there. Keep rolling till the thickness is even.

Add the filling to the pie pan, and cover it with the top layer of crust. Flute the edges, and put a few holes in the top crust for the steam to escape. I like to use a clear glass pie pan. It is easier to tell when the pie is done. I never follow cookbook directions for baking a pie. Some instruct you to paint beaten egg and water, or even milk on top of the crust and the edges. Other recipes say to form a ring of aluminum foil around the pie to prevent the edges from burning. I found a simpler, and far less messy, solution.

Some cookbook recipes say to turn the oven up to 400 degrees for ten minutes to start to brown the crust. Then reduce the heat to 375 degrees for the remaining bake time. I ended up with a dark brown crust that everyone wanted to scrape off and throw away. Everyone’s oven seems to heat differently, so this just didn’t work.

My solution was a simple one: Forget the egg, water, or milk. Forget the aluminum foil. Just turn the oven down to 325 degrees and bake it longer, usually about 1 hour and 15 minutes. Just keep an eye on it. If you are using a clear glass pie pan, you can remove it from the oven, hold the pie up and see if there is a gray area on the bottom of the pan. If so, then the bottom crust isn’t done yet. Put it back in the oven, and check it again in a few minutes. At this temperature, the crust will be gorgeous!

ENJOYING THE FRUITS OF YOUR LABORS

At family reunions, some members of my family like to bury a slice of pie under vanilla ice cream, then cover the whole thing with whipped cream that has been sweetened with sugar and vanilla. And I have been known to have apple pie for breakfast, which I am told is an old New England custom. Cinnamon ice cream seems to be available only at certain times of the year, such as Thanksgiving. It is scrumptious on hot apple pie. Any way you like it, apple pie is about as American as you can get!

« THE JOY OF SPRING FLOWERS
CHOOSING YOUR GREENHOUSE PLANTS »